From 1 to October 8, 2011 the Mission to Mexico has been made, in which several companies from FEAMM has participated . The mission was a success by the great interest shown by Mexican customers for high-tech molds of Spanish companies.

Mexico is the 14th largest economy and second in Latin America, and after an accelerated process of internationalization of its economy, has become a global trading power and a key partner to penetrate the U.S. market. Has business relationships increasingly intense with the EU. Has amended its Foreign Investment Law and signed several free trade and investment, which has increased the attractiveness of investing in the country, and Spain is emerging as top investor of the EU in Mexico and second in the world, only behind U.S.

The mission of FEAMM was made in the same dates with the most important plastics trade fair and popular in Central America. This allowed several interviews were held at the fair itself, thus avoiding some of the largest internal travels. 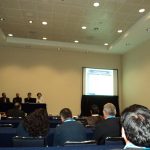 Coinciding with the exhibition and FEAMM mission, the association ASCAMM, FEAMM founding member, organized a conference entitled “ASCAMM-IBEROEKA Forum”, which was excellent papers from the Mexican government and companies also in the country.

After the presentations, FEAMM organized interviews between attendance, speakers, and Spanish companies members of the mission of FEAMM.