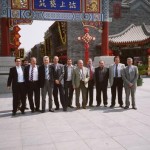 FEAMM organizes trade missions to countries with commercial interest for the mould and die spanish sector. Among the countries most visited by FEAMM’s companies are Mexico, China, India, Morocco and East Europe. At the end of each year FEAMM plans together with its members the trade missions plan for the next year. FEAMM also collaborates with other sectorial trade associations to increase the list of trade missions.

ICEX always collaborates with FEAMM with economical support and its wide network of foreign offices.

From 22nd to 26th of October FEAMM, with the support of ICEX, organized a trade mission to Colombia with the aim to contact potential customers and search for representants.

MISSION TO MEXICO 2013 From 2nd to 9th March a delegation of companies from FEAMM visited more than 60 Mexican manufacturers of plastic components, metal and aluminum in order to get trade agreements between Spain and Mexico. More information