The NPE, the largest and most important plastics trade fair of the Americas, held from 2 to 5 April in the Orange Convention Center in Orlando, Florida, leaving behind the traditional celebration in Chicago. The NPE is held every 3 years.

1,933 international exhibitors took about 87.000m2 to serve a total of 55,359 visitors, mainly from USA, but also with large influx of Latin American visitors, representing almost 26% of all visits.

Were 15 Spanish companies and organizations that coordinated by AMEC-imapc FEAMM and participated in the fair, part of the Spanish group participation, which is supported by ICEX, Spanish Institute of Foreign Trade.

The entire industry was there

The world’s leading manufacturers of injection molding machines, extrusion, thermoforming and other processes had strong presence at the show, with massive machine up and running within 4 days of competition and with large stands.

Asian countries had a major presence with several pavilions of China. Portugal was also present with an official pavilion full of mold makers companies.

Packaging sector employers were the most visited FEAMM companies.

Only in the FEAMM booth was attended by more than 20 visits, 15 of which were considered effective business contacts and have already been sent for commercial monitoring companies FEAMM members. 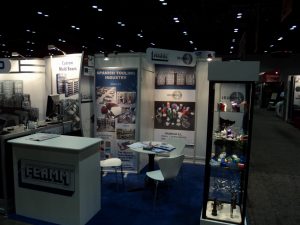